Migration of the Caper Whites 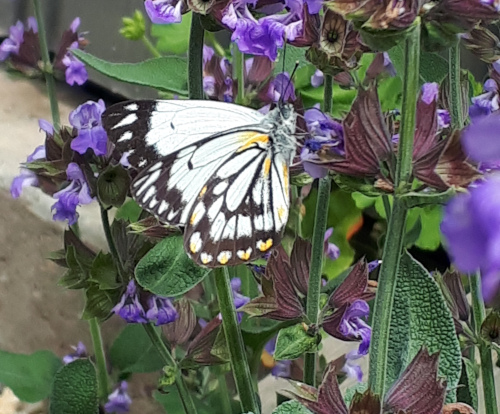 out my front window in suburban Wangaratta this morning I noticed a white butterfly fluttering by, and a few in the background, and I thought gee, the Cabbage White butterflies are bad this year!.  But then another pair flew by and another, all in the same south-westerly direction.

Something stirred in the back of my brain about butterfly migrations so I went out into my back yard to have a look.  Sure enough there was a steady stream of butterflies coming from the northeast, but when one passed close by I could see the wings were edged with black, not like Cabbage Whites at all.  I'm not very practiced at identifying butterflies, especially fluttering by, and wished for a butterfly net to capture one to get a good look at it.

Pulling out my Common & Waterhouse I was a bit overwhelmed by the number of white butterflies (not entirely white, but classified as whites).  I couldn't see any colour on the butterflies fluttering by, but eventually looking at the distribution maps settled on the Caper White, which has minimal colour and a mainland-wide distribution and to the north.  Common & Waterhouse notes that:

"Immense migratory flights of this species frequently occur in southern Queensland and New South Wales and sometimes extend into Victoria.  Entomologists at the Australian Museum are collecting information about such flights, but it is still too early to reach conclusions about their function in the biology of the species.  The larval food plants do not normally grow farther south than about the latitude of Newcastle in the east and Griffith in the south-west, but migratory flights often extend well into Victoria and sometimes to southern Victoria"

Weird that the migrations are away from food plants.  Why??

Eventually I noticed that some were stopping to feed on my sage bush, which was in full flower.  They must have been hungry, because they let me get close enough to photograph them with my phone.  Not the best photos, but enough to confirm the identification as Caper White, Belenois java.  Interestingly the photo on the Australian Museum website seems to also be on sage bush.

0 #2 TonyFaithfull 2021-01-22 05:13
Michael Braby writes in Butterflies of Australia that "In [southern NSW, the ACT and Victoria], adults usually arrive during migration and as the larval food plants do not occur there naturally, resident populations are not established although limited breeding may occur where the plants are grown in cultivation. The migrations usually last only afew weeks, but the overall movement patterns of these flights are complex and have not been fully investigated and analysed. In south-eastern QLD, Lister (1978) recorded a south-easterly migration, and in inland southern NSW larege southerly flights occur in November and December (E.D. Edwards). In the ACT, the migrations also occur in late spring with adults usually flying north-eastwards (Kitching et al 1978). Near Sydney, however both southerly (Waterhouse 1932b) and northerly flights (E.D. Edwards have been observed. In central Victoria, westerly flights are usually observed during late spring (Braby 1989) but in north-western Victoria small south-easterly movements are often observed earlier in the season in August or September (F. Douglas)."

So there is a confusing range of observations, and little clarity on the cause and pattern of migration of this species.
0 #1 TonyFaithfull 2021-01-22 04:51
My brother Ian Faithfull sent me two articles he wrote for the Victorian Entomologist (the newsletter of the Entomological Society of Victoria)

The other discusses food plants of the Caper White, records of egg-laying on non-host plants, and speculates on causes of migrations. Ian compiles a number of relevant reports from 1998: a large number of Caper Whites observed at Killawarra near Wangaratta in late October 1998, migration from the west at Frankston on 30 October, large numbers of dead individuals on the Bogong High Plains, and a low density northward migration in early November at Reef Hills Park, which he speculated may have been a return migration. (Mass oviposition by Belenois java teutonia (Lepidoptera: Pieridae) on Correa baeuerlinii (Rutaceae) in north east Victoria, with subsequent northward migration, Victorian Entomologist 35(2) April 2005).
Refresh comments list
RSS feed for comments to this post