Well, after a long break from writing for this blog, during which time I have moved to the rural city of Wangaratta, the central town in northeast Victoria, I have settled in and started exploring.

Only 10 minutes drive away is a really interesting area of Box Ironbark forest - the Killawarra section of the Warby-Ovens National Park, north of the Warby Ranges.

I can't think that I have ever really visited a Box Ironbark forest in the late winter before, and maybe for those in the know this is obvious, but in late winter the ground is bright green with a dense almost continuous growth of geophytes - lilies mainly but also orchids and yam daisies.  Crunching through the bone dry leaf litter of these forests in late spring, summer or autumn, you'd never know all the bulbs/corms/tubers just beneath the surface.

Now coming from Melbourne, where annual grassy weeds have largely overtaken geophytes as winter growers, I have never really understood the opinions of early explorers (discussion here) that some parts of the bush were like an English garden, with widely spaced trees and 'grass' and was very easy to ride through (on horseback).  Because if the annual grasses were introduced after the explorers (they were) then how could the forests be so green?

But of course it wasn't annual grasses making it green, it was the geophytes.  Well, of course there were the Red Gum Grassy Woodlands too, but to my mind they don't quite fit that description.

In the photo below you can see the spread of green.  I swear, it's mostly lilies.  They weren't flowering yet (it was late August), and my ID is not that good, but I guess they are predominantly Small Vanilla Lilies. 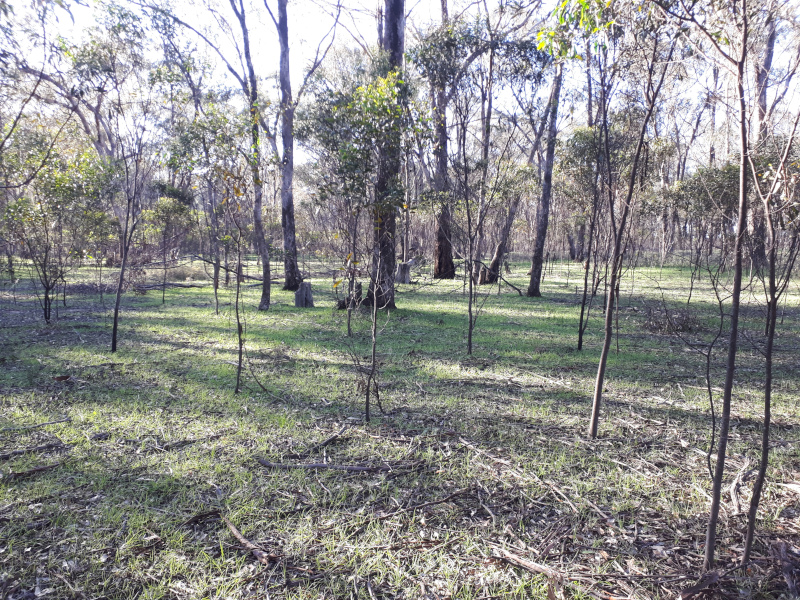 Now this forest has been heavily logged for fenceposts and firewood, and the majestic old trees just aren't there.  But imagine if the trees were big and more widely spaced, and the middle-storey Acacias were a bit more sparse, I get it would look like an English park.

It's a bit concerning that late in the day in the distance I could hear the snarl of a chainsaw.  Perhaps it was legal and not in the Park, but there is an epidemic of illegal firewood harvesting in Victoria at the moment.  Just look how much fallen timber there is providing habitat on the ground.  None.  Plenty of stumps though, but old stumps.

The history of this bit of forest is relevant here.  During the second world war 2 groups of Italians were interned in the forest, and employed cutting timber (including green timber) for firewood.  So part of the absence of rotting timber on the ground may date from then.  And subsequently it was State Forest, and maybe it was legal to take firewood under that management regime.  Now, luckily it is National Park, and we can hope that its habitat values continue to improve as the trees start to develop hollows.

But will the geophyte understorey survive?

Closest to where the internment camps were, the native geophytes have been displaced by an even brighter green - my nightmare plant Oxalis pes-caprae, forming a continuous dense sward along the lower slopes of Spring Creek.  Not a sign of it however in the eastern part of the forest where the above photo was taken.  So that is one threat.

Another is annual grasses.  Interestingly I did find scattered Annual Veldgrass, but not much.  I'm thinking that wallaby grazing must really be keeping it down.  I've got evidence for that too.  There is an exclusion plot adjacent to the Killawarra Forest Camp (now a campground, previously one of the internment camps), and the Annual Veldgrass is doing much better inside the exclusion plot (see the picture).  Pity for whatever it was that the exclusion plot was put in to protect!

I didn't see or hear any kangaroos on my exploratory walk, which surprised me.  But I just about bumped into one Swamp Wallaby who was very concerned with getting as much Vanilla Lily into him as he could, and wasn't particularly worried by me.  I didn't see any rabbit droppings, nor cattle or sheep droppings, so I assume the Annual Veldgrass is being eaten by wallabies or kangaroos.

So in summer when visiting a park like this and thinking 'Wow, so little groundcover! It must be overgrazed by kangaroos'  pause and ponder whether the kangaroos might indeed be protecting the geophyte diversity.